Although our store is officially closed, we have a limited number of items left. 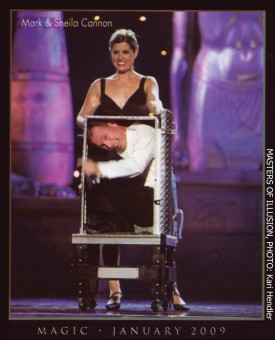 are leading performers of Escape, Magic & Illusion, and have been featured year after year at the WORLD FAMOUS HOLLYWOOD MAGIC CASTLE, on Cruise ships, television, the Disneyland Hotel, Europe, as well as all of the hotels in the Palm Springs Resort area.  Additionally, they have designed several unique escapes for other performers for use on TV in Hollywood, Las Vegas, New York, London, Cancun, Germany,  Asia, and regularly consult on major motion picture and television projects.

Mark & Sheila Cannon's show is a refreshingly different -and Dangerous- escape act that is designed for sophisticated adult and family audiences. Their unique, fast-paced performance consists of audience participation, exciting visual magic, and death-defying escapes. As an example, in the "Spiked Cabinet", Mark must escape from underneath a wall of spikes before the rope supporting them burns through! AND ALL OF THIS ACTION TAKES PLACE IN FULL VIEW OF THE AUDIENCE - not behind a curtain. This act alone is usually talked about for days by those who have witnessed it. 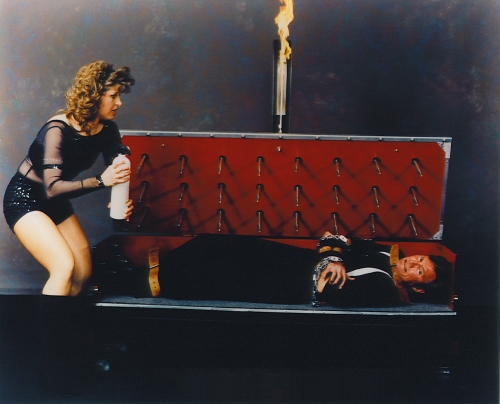 To schedule a show, contact Mark & Sheila by clicking here.
If you host a magic organization and would like to schedule Mark & Sheila Cannon's 21st Century Escape Lecture, click here. This is the same lecture that was recently featured at the Hollywood Magic Castle and met with rave reviews.
Mark & Sheila Cannon are also owners of Cannon's Great Escapes, a company that provides escape equipment for the professional escape artist.

(To see 2011 Highlights, scroll down past Film/TV Consultation) 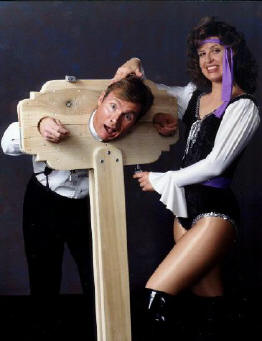 Escape Show at Riverside School for the Deaf,   Riverside, CA  May 19

Here's what people are saying about Mark & Sheila Cannon:

"...It was truly a commanding performance, and your exceptional escape abilities continue to impress us as they have audiences worldwide.... the eloquent and succinct way in which you presented them to the camera helped make the show a success.  Our only wish is that we can include you in another of our programs in the future.

"Thanks again for performing at the Madrid show. Your performance was the best attention
driver we've had at (our) booth to date. We will definitely keep you in mind for future shows"
....Noelle, BLVDWest

"Mark is definitely in the upper percentile, because he does real things - like Houdini did"
....The Sun, San Bernardino CA

"Mark & Sheila...were GREAT!  I've been involved with this event for twenty years, and I can honestly say you were my favorite performers.  I've heard nothing but very positive comments about your show from people who attended.  The show was very professional, entertaining, and enjoyed by people of all ages...I found you very easy to work with..."
....Mark, Victorian Fair, Winona, MN

"Modern-day escapist, Mark Cannon...performs stunts with his wife Sheila around the world. Recently he got himself out of a triple-locked solid steel diamond-plated box, while his hands and feet were shackled."

"Cannon...one of the few escapists who has performed at the (Hollywood) Magic Castle."
....The Daily Press, Hampton Roads, Virginia